In this article I will reveal my secrets and techniques to recording decent thunder and lightning. Many, many years and sleepless nights have gone into perfecting the art of recording the thunderstorm and I will finally share. But first, I want to share a little history and tell you how I developed these secrets and techniques. It was not so easy at first and here’s the story I’m still alive to tell. Part 1: Live and Learn.

I recorded my first thunder clap back in 1992 in Seattle. I was a wild young man living downtown in an apartment building and used to run up the 5 flights of stairs to the rooftop and stand outside during the storms. I only recorded one clap back then but I kept trying, and trying, and trying. When I moved to North Idaho in 1997 I attempted to record more storms even though I had no idea what I was doing. I was renting a house in the country and many storms passed through and I tried to record every one of them. I would run outside with my gear and crouch down behind my car to hide from the rain and thunderous booms like the car was going to protect me. I would also set the microphone out on the covered doorstep or place it out a window. Well, these techniques yielded some decent results I was always striving for the perfect lightning strike or thunder clap. For some reason I was not that concerned for my safety as I was totally obsessed with getting the perfect recording. Stupid me, I have learned a lot since those days and the older I get the wiser (the jury is still out on that one) and safer I try to be.

Flash forward to my days living in my mountain cabin in the thick forests of North Idaho. While living there I further refined my techniques recording thunder and lightning. After recording from the front porch, the cabin windows and right out in the front yard (yep, stupid me) I figured out that it was almost always dry under the tall fir trees we have here. Hmmm… I had a bright idea! What would the results be if I placed my microphones and recorder out under a close knit group of these trees? So, That’s what I did for a while until a heavy rain storm came one day and the drips from the branches hit the gear. 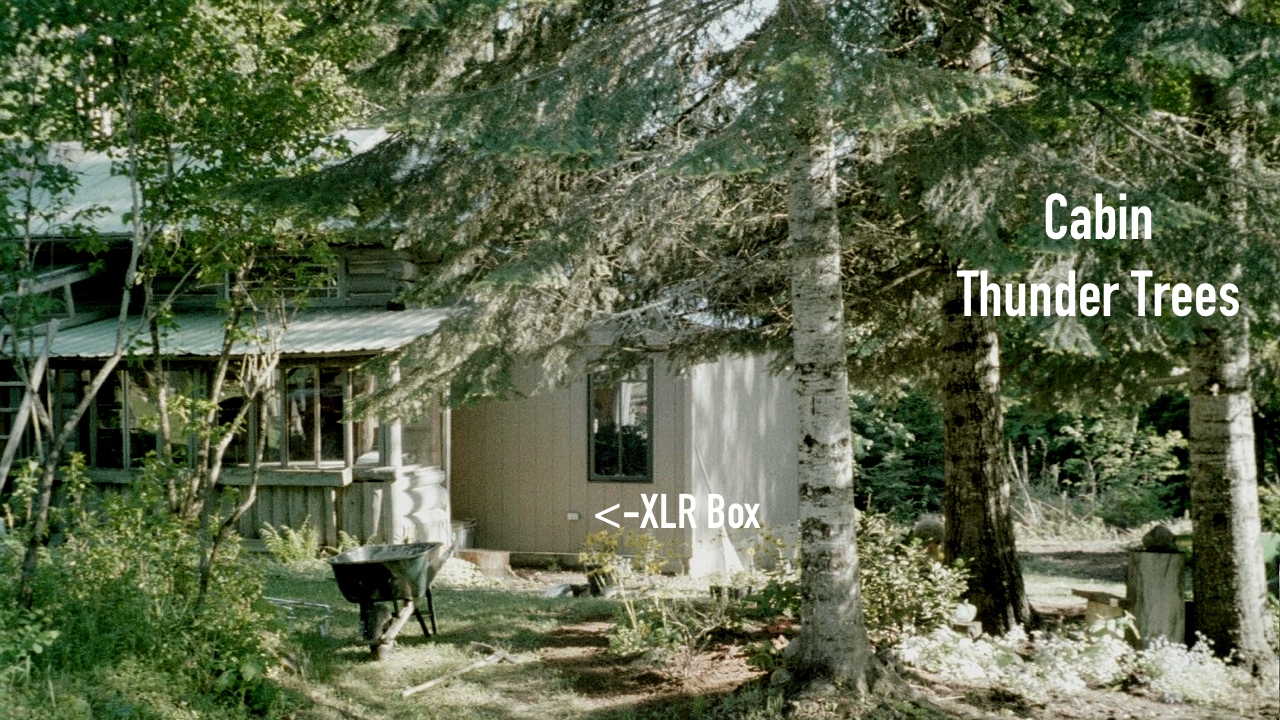 What now? Well, I devised a system of wire hangers, window screens and bath towels to hang a few feet above the microphone. This rig hung from a branch about 8 feet up the tree. I cleared away all the low branches and presto! I had my rain cover. It worked really well until the towels got soaking wet but by then the lightning and thunder portion of a storm had passed and I could run outside and grab the gear without the threat of being hit by lightning.

OK, I solved one problem but now I have another. I could not monitor my HHB PortaDAT DAT machine during the storm as I was inside the cabin having a scotch or two hoping for the best. How do I protect myself and the DAT machine from the rain and the wind during these storms and keep the levels at the correct setting? After some head scratching I noticed my studio was 50 feet away from the group of trees I was using. Long cables I declared! That was easy. Now, how do I get the cables into the studio so I can kick back in the comfort of my sound proofed audio studio and record the show? Not so easy: drill some holes though the wall and install some XLR plugs to feed the signal inside. I installed a weatherized junction box on the outside wall with the XLR jacks safely inside. I had to make sure the XLR jacks would be weather proof during the long winters we have here.

I recorded thunder at the cabin for over five blissful years. I got some fantastic recordings some of which can be found on my first Thunderstorm HD library. During this time I briefly used a Shure VP-88 but eventually changed my main microphone to a Sanken CSS-5 and my recorder to a High Definition Fostex FR-2. I also used this rig for everything else I was recording at the time. The FR-2 was my first HD recorder and the Sanken CSS-5 was my first microphone that had a mortgage on it. My quest for the perfect thunder recording was not over. In fact, it was just beginning.

Flash forward again to 2005 and a new home studio. I moved from the mountains, my long hair now short but with my beard intact across the river to a wide open location that sounded great during thunderstorms. I had one issue: I no longer had my fir tree friends to protect my recording gear from the harsh effects of Nature’s Fury. It took a bit of trial and error but I finally found a way to record from the safety of my kitchen with the microphones set outside at the front entrance facing North. There was a 24 inch roof eave that hung over the entrance and it protected the microphones enough from the rain. Unless there was heavy rain and very strong wind gusts, which can happen quite e bit here, the location worked for the most part. Well… except for the rain drips off the sides of the metal roofed house. 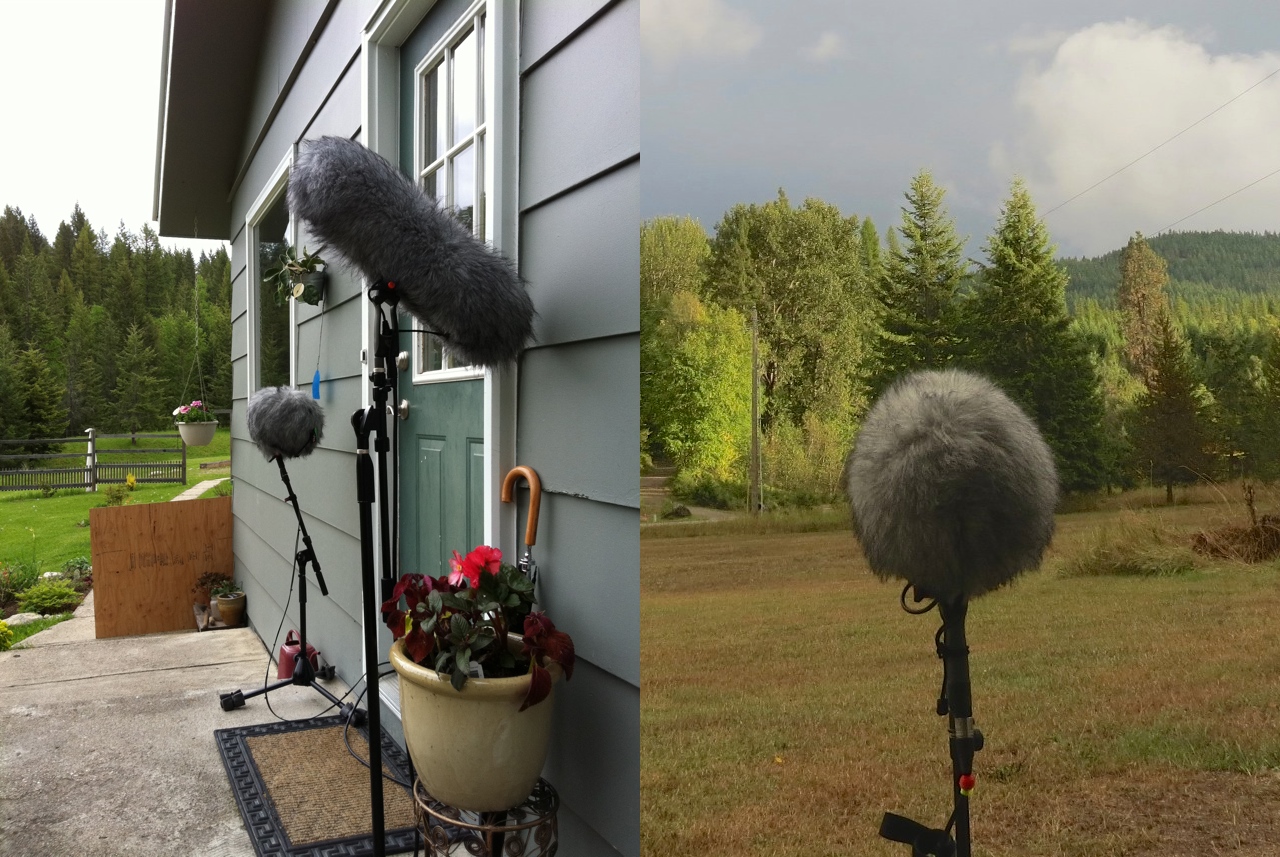 Head scratching again, I must have looked like I had dry scalp or something during this time. I had to devise a way that I could quickly set up some sort of barrier on each side of the microphones. To the left was my wood deck and to the right was my concrete walkway. Water drips sound great on those surfaces but NOT during my thunderstorms. So I found some 3×4 foot pieces of plywood and set them up on the corner of the house held in place by cinder blocks. I placed a towel over them to help absorb the sound. Basically, these plywood sheets extended the side of the house out a bit to block the sound of drips hitting the ground. It worked for the most part but it was still not enough. During the winter it’s not a good idea to have rain gutters on a house with a metal roof. So, to solve the rain drip issued I installed 10 feet of removable gutter to direct the water South away from the North facing part of the house. Yay! It worked! I was so happy to have a fairly good location to record thunderstorms and I recorded many.

The best sounding and cleanest storms rolled in at night when there was no traffic, birds and other environmental noises that get into the recordings during the daytime. During thunderstorm season which runs from April to October I had my gear at the ready. From the first clap I heard way off in the distance to “record ready” was about 4 minutes for the most part. Sometimes a storm would slowly approach and I had the chance to set the microphones out on the front lawn or on the other side of my garage. These slow moving storms had little rain at the beginning and I had plenty of time to gather the gear up and move to my preferred location. I have been caught off guard many times with fast moving storms as they seem to come out of nowhere and the first couple of claps are always the cleanest.

Ready to flash forward again? OK, here we go! For the last year I have been recording in a third location. Not very far from where I was previously so I knew what to expect in terms of the sound of the thunder. This new location does not have any gutters… Phew! No more dripping sounds to deal with! To my surprise I found a group of trees 75 feet from the back of the home, very near the large covered deck. I have my fir tree friends back and a couple of new cedar tree friends. I have two locations under these trees to set up my microphones. There are low hanging branches and I devised a horizontal frame with small wood sticks on these branches to suspend moving blankets over the microphones. I run two 75 foot, 5-pin XLR stereo microphone cable across the lawn onto the deck and into the house where I can sit comfortably with my single malt scotch and record. 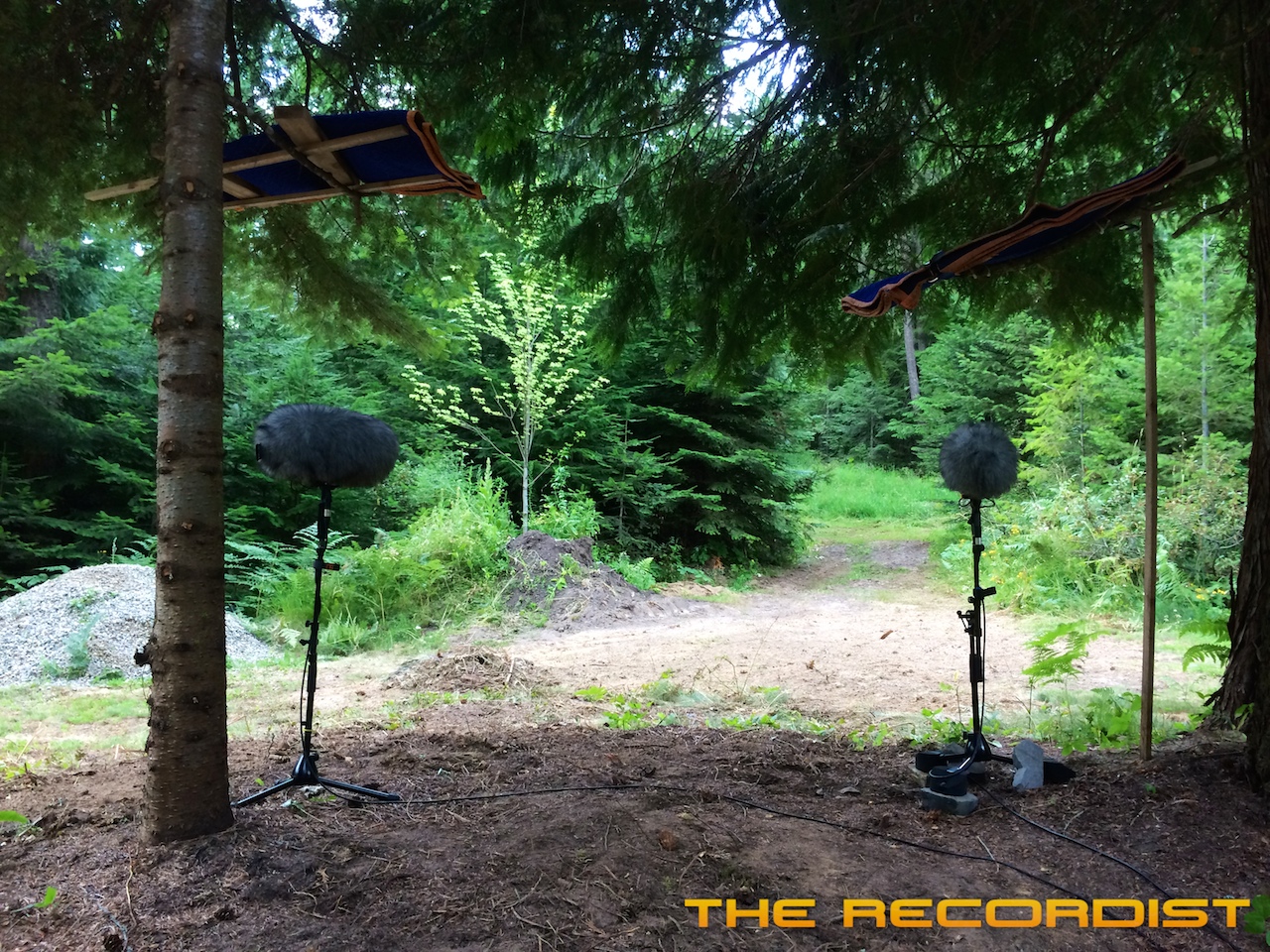 This latest thunderstorm library is mainly recorded with two stereo sets of Sennheiser MKH-8040ST microphones one XY and the other ORTF. I place them about three meters apart under the trees in my back yard with each microphone set pointed in a different direction based on what my weather tracking Apps indicate the direction of the storm will come from. I use two sync locked Sound Devices SD-702 recorders. Sometimes I need to quickly separate the microphone rigs and I can move one with the cable and recorder to the other side of the house easily and quickly. I grab the recorder, run out and grab the microphone then run to the other side of the house with everything still attached and operating. I have used my 744T at times but I like the flexibility of two recorders for distant placement. I have found that moving fast has it’s advantages as I have grabbed sounds I otherwise would have missed. When possible I set up my Sony PCM D-100 on the other side of the house and actually recorded one of my favorite dry lightning strikes with it. This summer was very active and some great storms rolled in.

Well, that’s it for Part 1. That is my story so far about the actual locations and rigging used to record these bad boys. I absolutely love recording thunder and lightning storms, I’m almost obsessed with it. Just ask my wife, she always asks me “Get anything good today?” I reply “I hope so, I can’t wait for the next one to come”

The ultimate goal for a sound recordist/sound designer is to record decent sounds you can design sound with correct? Part 2 of this article will focus more in depth on the recorders, spatial aspects of each microphone I used and the final editing/mastering techniques I applied to each and every thunder and lightning strike I recorded. Fun huh?

Until next time, be safe out there recording. Thunderstorms can be dangerous, even deadly. Take care of yourself. It’s the most important thing… Well, a wicked dry lightning strike comes in second in my book. Namaste.

Please also check out Frank’s recent interview about Thunderstorm III over at A Sound Effect.