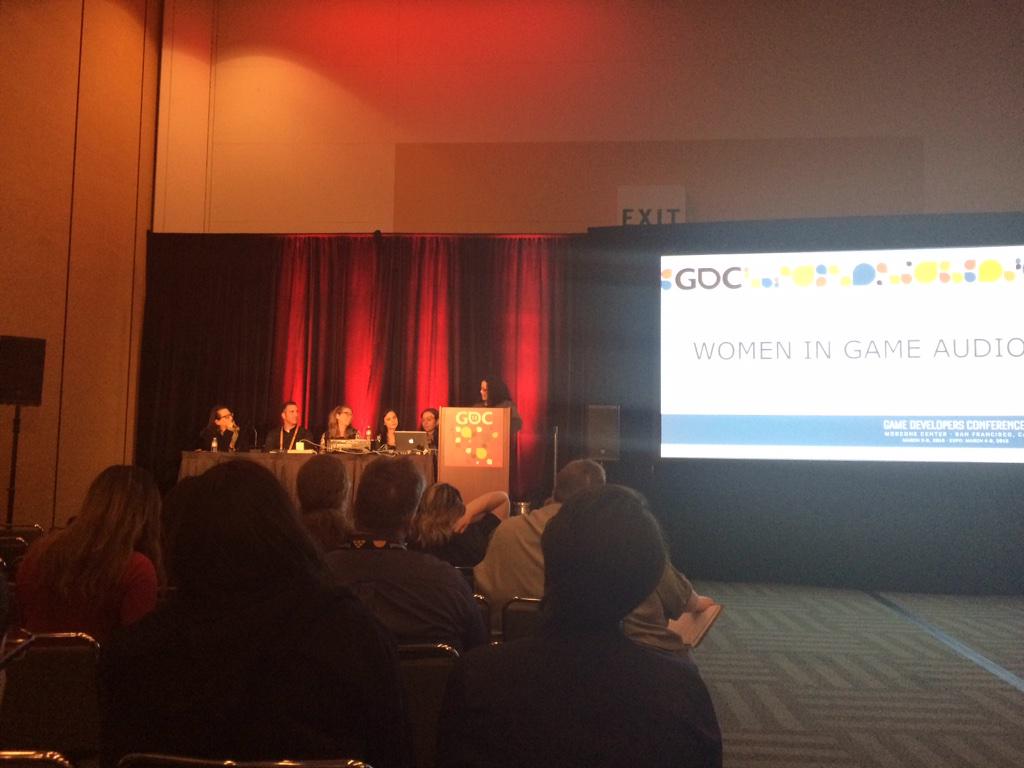 Let me begin with a brief preface about myself.  I am a woman studying film music and game audio at Berklee College of Music. I came to GDC for the first time this year wide-eyed and eager to learn.  Coming from an institution that is 70% male, I know all too well the gender disparity that exists in everything I love and do.  Though I have been fortunate enough to not let this affect me in a negative way, it is still a problem I am very passionate about addressing, hence why I decided to review this particular panel.  I will be going over the topics that were presented, the answers the panel provided, and what I learned myself. Please note that any answer not directly quoted is to be taken as a mutual consensus by the panel.

The goal of the Women In Game Audio panel was to address the difficulties women face as they try to cultivate their careers, the pros and cons of versatility versus finding your own distinct voice, and how both men and women can help support more diversity in the industry.

Is there a difference in the way men compose vs. women?

“I don’t know”, said Laura. And frankly, I doubt anyone else knows either.  However, we can see that composers such as Laura Karpman and Penka Kouneva can write both muscular, masculine pieces as well as beautiful, delicate melodies with heartfelt emotion.  The panel engaged the audience in an exercise in which Laura and Penka each played two of their own pieces, one that would normally be deemed as masculine, and the other as feminine.  For example:

A Warrior’s Odyssey- Between Eden by Penka Kouneva

Professional, beautiful, and emotionally riveting, these women proved that a woman writing masculine music isn’t so far fetched after all.  So what does this teach us? Masculinity and femininity are to be used solely as musical descriptors.  This is a pattern so ingrained that it cannot be helped.  What can be helped is the presumption that women simply cannot write masculine music, and if they can, not as well as men.  Penka, Laura, and other women composers are paving the way toward change, showing the world that women can do all of these and more.  Through hard work, mastery of one’s craft, and an intense passion to create, they serve as role models for young women such as myself.

How can we get more women coding?

There isn’t a concrete reason to why there are less women coding, but encouraging women to view coding as a creative tool rather than an advanced technological skill reserved only for men is a good starting point.

Do women have more of a problem making themselves visible?

No. Being a woman in this industry actually improves visibility.

What do music supervisors or audio directors look for when hiring? What makes someone stand out?

We heard great advice on this topic from Paul and Benedicte:

Are you writing something unique? Does it represent who you are as a person and a composer, or is it generic and blatantly borrowed from a popular Hans Zimmer cue? Do your demos sound professional? Supervisors look through thousands of demos, and will usually have an opinion of your music in 15 seconds or less.  They also look for people who can do a specific style especially well, and will remember them when they need that skill set.

What Benedicte said next raised some thought provoking questions for me.

Seems obvious, doesn’t it? However, combined with my own personal experience, it raised some thought provoking questions. In 2014, GameSoundCon released a survey detailing the current state of the game audio industry.  According to their result, 96% of respondents were male. This means that the game audio industry is overwhelmingly male.

Being female in any male dominated industry naturally makes me an object of curiosity and wonder.  I play trumpet, go to a prominently male college, and I am pursuing a career in game audio.  Men have marveled in curiosity at this apparently rare phenomenon, both with positivity and negativity.

This is why the concept of trust was so intriguing to me. Naturally, we will want to work with someone who has proven his or her trustworthiness.  On the other hand, humans gravitate towards others of similar qualities because of the level of comfort that is already there.  It is simply human nature.  Are women automatically thought of (consciously or not) as less trustworthy than our male counterparts? And if so, why? Is it because we haven’t been given a chance to really prove ourselves since there are so few women working in game audio? Or is it because we are an anomaly, a woman in a boy’s club who makes the majority uncomfortable because we are different? I cannot answer of any of these questions myself, but I feel they are important questions to consider.

It’s also important to note that expressing any kind of emotion musically requires practice. Practice results in skills needed to express that emotion well.  Women more rarely than men have an opportunity to practice scoring certain kinds of “masculine” genres, such as action, Hence, it is harder for them to be trusted with such jobs.

Belinda to Corina:  Have you ever experienced a situation where you were treated unfairly based on your gender?

No. We are all working towards the same goal, so they don’t look at me any differently because I am a woman. I am the only woman working in the game audio department.

What skills are needed to succeed in the industry?

Technical fluency, the ability to network and sell oneself, reliability, and to be undeniably good at your craft. And perhaps a bit of luck on your side.

I hope this review proves useful to you all, and that we will one day get to the point where this conversation is no longer needed.  Many thanks to the folks at Designing Sound for advocating awareness and equality!

Natalia is a composer and sound designer, working on smaller films and games in addition to her studies at Berklee College of Music. She also co-coordinates the Women’s Film Initiative, a student group open to all women composers created to foster a sense of community and empowerment. She can be reached at ncperez@berklee.edu.