Organised by the Edinburgh Game Symposium for the first time since their creation 3 years ago, the AWEdio Jam was the opportunity for professionals, students and audio enthusiasts to get together during a weekend (21st to 23rd of October) and try to create anything audio-related based on a specific theme. The event also included very insightful talks from industry veterans Will Morton, John Broomhall and Helge Borgarts.

It started on Friday evening with Will’s talk, who gave the audience great musical tips to convey the desired feeling through a specific scene, emphasising on the fact that sound, as the picture or the actual scenario, is also a powerful way to tell a story or to impact on the audience perception about a specific moment. He also used movies such as The Hobbit and Blade II as examples on how the integration (or even the absence) of sound effects can help the viewer to focus on a specific part of a scene before pursuing his talk with an excerpt of a recent game on which Solid Audioworks -Will’s company- worked: Madden NFL 17. This next and last part of his talk was for Will the opportunity to show us the same 15-ish seconds of a cutscene at various production stages, and to peel off all the sound layers used along with a detailed explanation of Solid Audioworks’ process to help the player focus on and understand the importance of a specific action happening on the screen at that time. 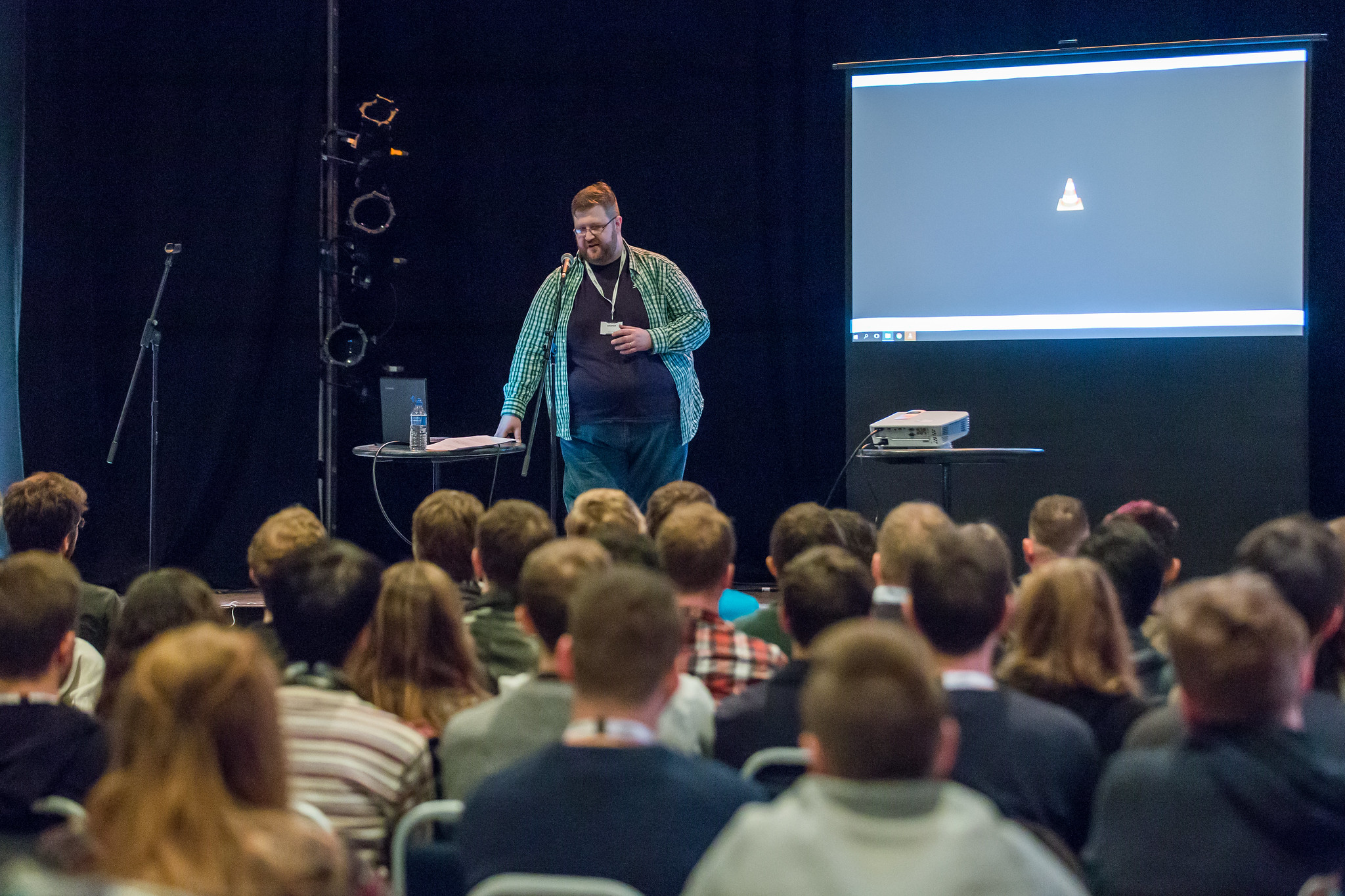 Will Morton (picture by Chris Scott)

The next day marked the start of the jam, but not before another talk by another prestigious guest: John Broomhall. Being the jazz keyboardist he is, he couldn’t start his talk with anything else than playing music and, having the experience in video games he has, he couldn’t not make it interactive. This combination resulted on a 5 minutes jazz improvisation while being supported by an audience (including yours truly) “mouthdrumming” as best as we can -an excerpt can be found here for your enjoyment-. That great ice-breaking moment done, John started his talk by talking about the emotional nature of sound and its increased power when used for a VR project. He also questioned the need for having a constant soundtrack for a whole game, specifying that while some games do culturally need it (such as Super Mario, as quoted by John), sometimes it’s better to leave a maximum of space for sound design; an even truer statement when spoken in the context of VR, where non-diagetic music can easily sound out of place.

On the specific topic of creation, he emphasised the need to get things down as quickly as possible, when the inspiration comes, without even thinking of any kind of polish. He then moved on to his work as a freelance composer, giving away some ideas about making the communication clearer between him and his clients along with various composition tips he’s using while facing a wall (listening to your piece from a different room, randomly switching your MIDI tracks instruments, …). Finally, he insisted on the necessity to speak up (while still being nice and open-minded) about things that could be bothering during a project creation; or to quote him: “Don’t compromise on really important stuff…but you don’t have to be a dick about it, right?”. 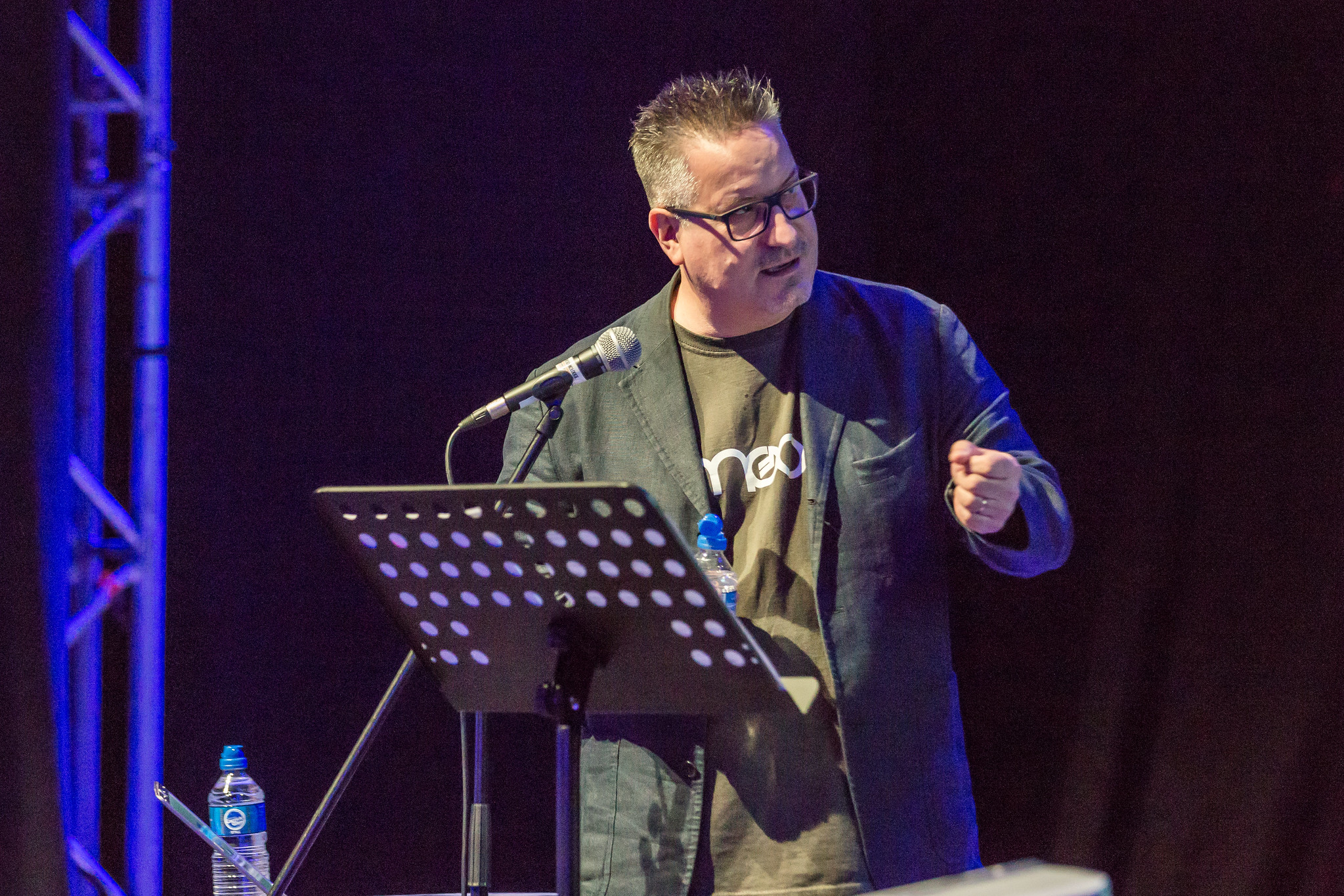 The end of John’s talk officially marked the beginning of the Jam, after which people went to the tables assigned to their respective teams and started brainstorming about this weekend topic, Time Travel. The Jam took place inside a modern church with several rooms available alongside the main one (pictured above), such as a recording room, a quiet room (for people looking to work with headphones far from the crowd) and a lounge where people could take a break and relax. A lot of gear was installed inside those rooms and it was more than pleasant to be certain that, whatever idea was burgeoning inside people’s head, they could find an instance of a good-quality piece of hardware here to materialise it. The Jam kept on going until around 6 pm (when the building had to close its doors) and started again on the next day in the morning, but not before the third and final talk of this event by Helge Borgarts.

Helge’s talk was about interactive and adaptive music. Underlining the many uses of a good soundtrack to bring a story or moments to life (conveying a sense of context, location, giving players feedbacks, … ), he insisted on the novelty of video games being interactive, allowing the soundtrack to follow the same path. Using examples of Guitar Hero and Skyrim to introduce the difference between interactive (Guitar Hero – the player actively triggers musical cues) and adaptive (Skyrim – the music changes in relation to the player actions) music, Helge focused his talk on the necessity of having dynamic audio in games to match their non-linear nature, quoting examples as old as Monkey Island II and his wonderful iMUSE system back in 1991. 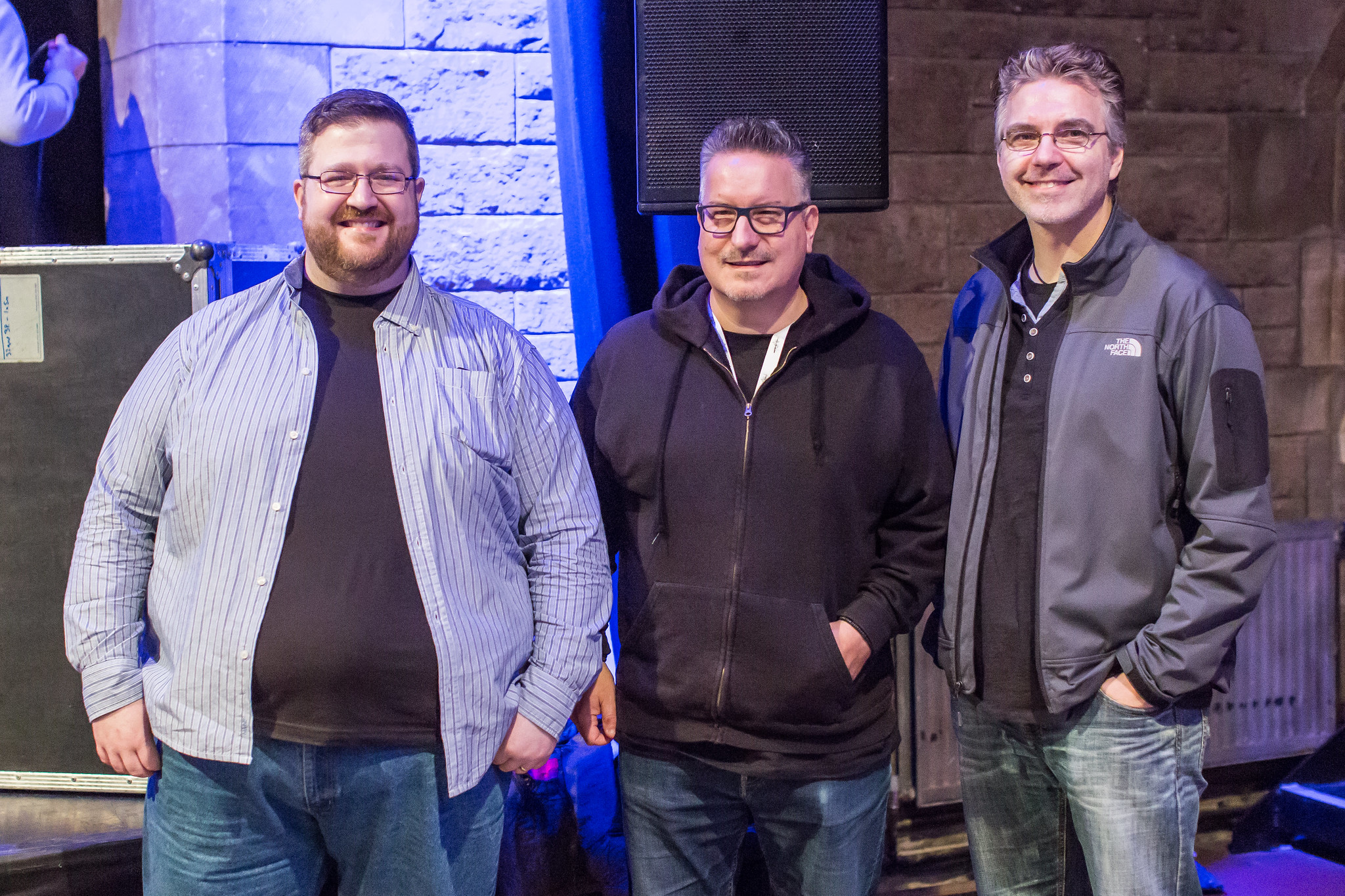 On the topic of adaptive music, Helge mentioned the main two approaches possibles, horizontal (various pieces of music transitioning between each other depending on what’s happening in game) and vertical (having one global track with its layer’s parameters varying with the action), and then proceeded to show us various examples of his work on the matter using Wwise. Finally, he spoke on the topic of VR and shared John’s opinion on how VR is/will be a game-changer in terms of game audio, as it’s now more important than ever to build a near-perfect soundscape in order not to break the immersion.

Following Helge’s talk, all the participants returned to their Jam projects for the final 2 hours before submission and live-stage presentations, which revealed a huge variety of approaches about the subject. The topic of Time Travel gave birth to several video games prototypes, one live-performed audio drama, one electroacoustic performance, an ambisonic ambient soundscape, a Max/MSP creation, one “chrono radio” audio interface and a couple of audio pieces, sometimes even supported by amazing visuals (not to mention a fantastic “whack-a-mole-sampler” game that gave the whole room a great round of laughs). 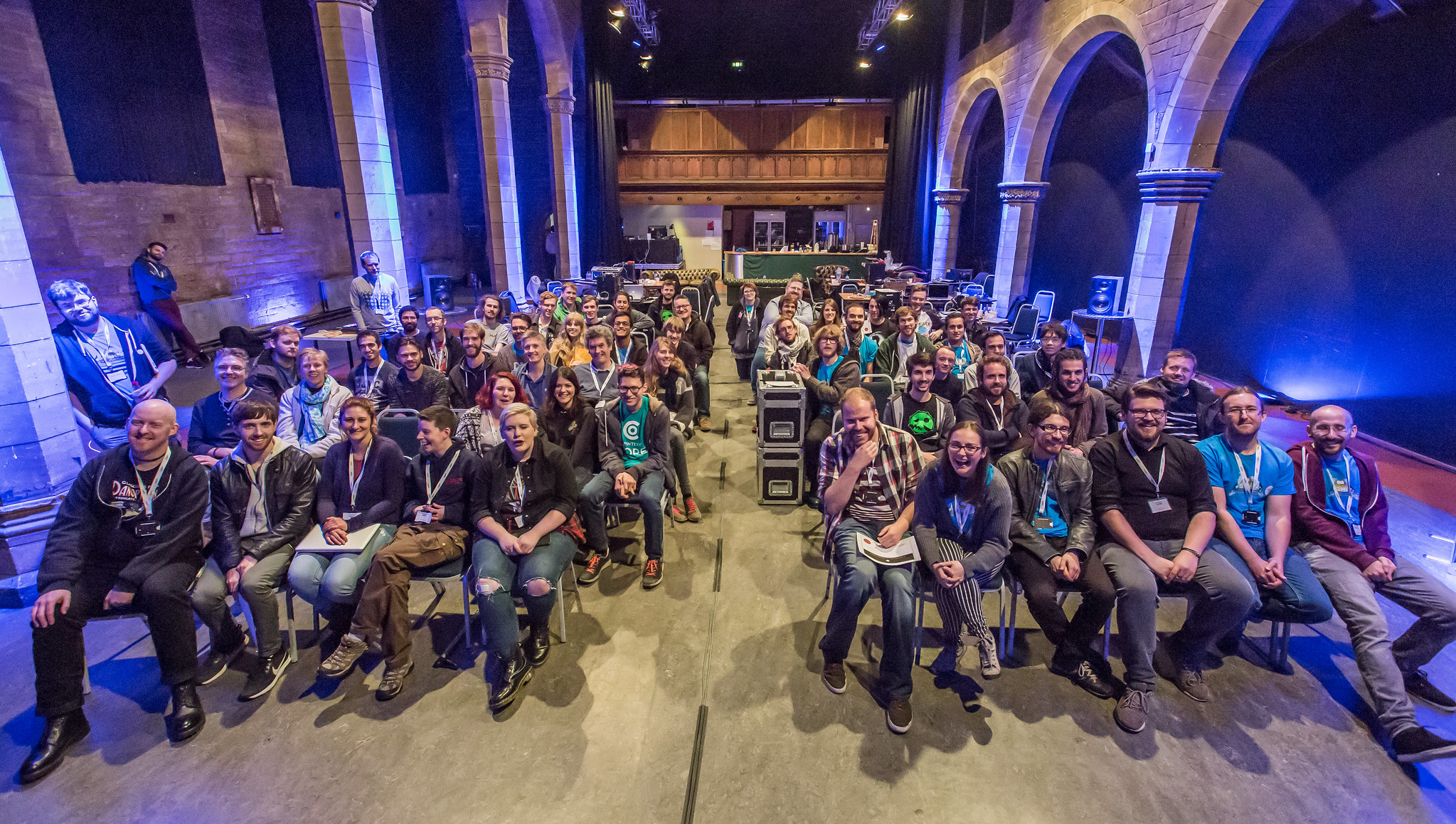 This weekend was overall an amazing way for everyone even only remotely interested in audio to meet and experiment with likeminded people and have a good chat on the perspectives offered by audio in games (or even in general). As listed above, the participants showed a variety of approaches of the topic and I think I’m not exaggerating by saying that everyone was really amazed by each other ideas and was approachable (and passionate) enough to share their own thoughts and processes to anyone who’d come and ask them. I couldn’t be thankful enough to the Edinburgh Game Symposium for creating and masterfully managing such an amazing event in such a beautiful place and can only hope this first-of-its-kind event is not the last. See you next time?